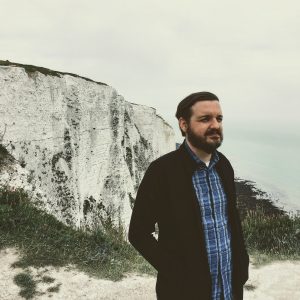 First of all, how are you doing these days? The world’s gone to hell the last year and a half, what are you doing to maintain a healthy state of mind?

It’s been tragic, stressful, and bizarre in turn, but I’m at the level of many others: coping, trying to stay positive. I keep looking forward.

To stay positive, I’ve been writing a lot. My output increased during lockdown. Writing always gives me sense of progress, so I’ve needed it while spinning wheels in other areas. I’m moving between the horror, mystery, and western genres.

My first book, Grimoire of the Four Impostors, releases September 7, 2021 from Nosetouch Press. It’s an occult horror set in the 17th century. I completed the manuscript in July 2020 during the height of lockdown.

When writing a short story, novella, or novel, what are some things you think you have to achieve to write something that will stand the test of time?

I don’t believe there’s a formula for timelessness. Or maybe I need to reread Joseph Campbell’s The Hero with a Thousand Faces and take better notes.

Honestly, I think the best you can do is write a good story with relatable characters. Don’t be trendy – maybe that’s a rule. Trendiness ages like milk.

Write a good story, create relatable characters, and don’t shy away from the truth. The rest is up to the audience.

Who are some contemporary writers every writer today should be reading (and why?)?

With fiction, Laird Barron is my favorite contemporary writer. His ability to engross the reader is unmatched, be it with his horror or crime fiction. I love the density of his prose. He’s versatile with genre, and his writing is deeply layered. I love the direction he’s taking with the Isaiah Coleridge novels.

With non-fiction, Holly Tucker is a favorite. She writes about French history and has a proclivity for bizarre subjects. I love the worlds she brings to life, and readers need to know there’s more to history than politics and war. How many books do we have on George Washington? Thousands. How many books do we have on transfusing blood from sheep to humans in 1660s France? Very few, but Tucker has one: Blood Work: A Tale of Medicine and Murder in the Scientific Revolution. It’s an amazing book.

If you had to make a list of the three most important rules when it comes to writing, what would those rules be (and why?)?

I have three rules for myself.

2. Take the necessary time to develop the craft. Writing is a skill. Ray Bradbury considered writing his first million words of fiction as his education. I believe in that idea. Write a million words before you decide to publish.

It’s been said print media is dead. What is your response to those who claim audiences in the future will have no need for books, stories, etc. (i.e., visual media will take over all modes of storytelling)?

I think the reality is this: things come and go, and then they return again. Doomsayers always bark along that road, but they’re usually shortsighted.

I remember getting into radio drama as a kid. I listened to Suspense and Escape. That medium had faded in the 50s. Then radio drama made a comeback in the 70s with CBS Radio Mystery Theater. Then the medium died again, and when it did it was presumed dead forever. When I started writing, I thought radio drama would never come back. I started out wanting to write radio plays, but there were no outlets. I should’ve written them anyway, because, with podcasts, the spirit of radio drama is alive and well. Against all odds, it’s popular again.

Books won’t die. The written word without visuals won’t die. Physical books might become more of a boutique service – higher quality, more expensive, catering to a niche audience. That gives booklovers something to look forward to, honestly – I’ve noticed an increase in the quality of cover art in recent years.

Who is an historical figure you’d like to sit down and have a drink and conversation with (and why?)?

I’m an introvert, so I’d probably regret committing to this, regardless of choice.

Frantz Schmidt, the executioner for Nuremberg from the 1570s through 1610s, would be interesting. His journal, and the book based on it (The Faithful Executioner by Joel F. Harrington), impacted me in a big way. This man killed 394 people during his 45 year career. At the same time he was complicated with aspirations. He wrote about the people he killed and tortured in his journal – sometimes he felt bad, sometimes he didn’t. He had pride in his profession, which made him precise. He once entered a song he wrote into a song writing competition. That type of detail amazes me. Schmidt’s era is the one I write about most often, so I’d love to gather some details and thoughts from him. I’d ask him to take me to the Kohlenberg Court, which was a conference of German executioners held since the 1300s. A lot of drinking went on there. The language was colorful. Imagine the books that would emerge from attendance at such a thing.

If Frantz is busy, I’ll have a drink with Elizabeth I. I have an obsession with her. I visited her tomb a couple years ago and was overwhelmed by the experience. I’d probably ask her about John Dee if I found the nerve. My guess is she’d be too shrewd to talk about much in front of a foreigner (and obvious spy) like me.

Thankfully, I have a lot going on. I have three books releasing in the next 15 months. My first book, Grimoire of the Four Impostors, is out September 7 in hardcover, paperback, and ebook from Nosetouch Press. Christine Scott did the cover, and it’s gorgeous! She really brought out the 17th century motif. I can’t thank her enough. There’s definitely some Frantz Schmidt influence in the book.

I have a completed manuscript for a western novel called The Hangman Feeds the Jackal, which I’m shopping around. This features a character, Elijah Valero, who graced the pages of Pulp Modern several years ago in a story called “The Spider Vignettes.”

With my next novel, I’m starting a series of occult investigator books set in the 17th century with a character from Grimoire of the Four Impostors.

Information on my novels and stories can be found at www.coyhall.com

Coy Hall lives in West Virginia with his wife, and they share a home with their clumsy Great Pyrenees. Coy splits time as an author of mystery and horror and as a professor of history. His first novel, GRIMOIRE OF THE FOUR IMPOSTORS, releases on September 7, 2021 from Nosetouch Press. His second novel, A SEANCE FOR WICKED KING DEATH, releases from Level Best Books in February 2022. Find out more about his stories and novels at http://www.coyhall.com.