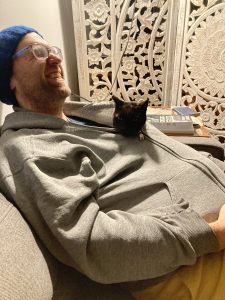 You know, that’s a tough question, insofar as there’s just so much great writing out there, so many great indie presses and magazines, and as tough as it is to make it in this field, there are also so many opportunities for people who write from underrepresented perspectives to find a voice, an audience, or a platform—and I really do think that’s important. So, I don’t know if this is one argument, but I would say that if I would make one argument for why you should read my work, it would be that maybe we share some of the same obsessions: with the crime genre, say, with what it can do. With the ways it can explore the complexities and contradictions of masculinity, of violence, or pain or history or love or redemption. And maybe also because I like to think I have a sense of humor that comes across in my writing, but there, that’s two arguments.

I always loved to read, for the sheer, escapist joy of it. Probably the books that made me most want to become a writer were Robert B. Parker’s Spenser novels. When I was a kid, I loved fantasy, David Eddings and Stephen R. Donaldson. I’ve never written seriously in that genre, but that’s also a big part of why I do this. And I loved C.S. Lewis’s Narnia books and Susan Cooper’s The Dark Is Rising series. I remember losing myself in those books, which is what I think I still look for when I read and hope to create for people when I write.

At the risk of writing a cop out answer, I’d say read whatever keeps you up at night and then try to figure out how those writers achieve those effects. Maybe that’s Proust. Maybe that’s Donald Westlake. (I should also say that as long as I’ve been doing this, I still feel like a “beginning writer.”) That said, if I were designing a syllabus, I’d probably teach a couple Edward P. Jones stories. He’s so good, he gets away with things you really shouldn’t do, like switching POV in the middle of a sentence. But I think it’s great to see examples of writers doing the impossible and getting away with it.

Read and write what you love and trust your instincts. There’s a funny, probably apocryphal anecdote I’ve heard in various iterations about a young writer who loves romance novels, but she’s ashamed of what she reads, so when she goes to work in the morning, she puts her Danielle Steele novel in a Charles Dickens dust jacket, so people on the subway won’t think she has trashy taste in literature. Then she goes home and tears her hair out trying to write literary stories of the sort she doesn’t even enjoy reading. I feel like I’ve been that writer too often in my life, and I sometimes still am. So, I would say read and write the stuff you love, even if the world doesn’t tell you it’s “good” or even especially serious. This is hard enough, so you might as well love what you do.

Some books change our lives. Can you share which books have absolutely changed the way you look at the world, the way you approach life? How did they affect this change in you?

Oh, man. Recently, I read bell hooks’ The Will to Change, which was a revelation. Like a lot of men, I think I’ve done a lot of reflection over the last couple years trying to reckon with the ways I’ve been part of the problem. That book has really helped me do a lot of that work. If I could treat Robert B. Parker’s Spenser novels as one large body of work, I would say that has also shaped the way I look at the world. They’ve made me ask questions about masculinity, heroism, what it means to show up for people in relationships and as friends. I’m not always satisfied those books have the “right” answers to those questions, but they make me ask them, which is more important, anyway. I cannot pinpoint a single book by Noam Chomsky. But there was a time in my life where I read a handful of his titles, which changed the way I understood politics and power, and I’ve really never looked back.

Of the movies I’ve seen on the big screen, but I would say Wim Wenders’ Wings of Desire because it’s so beautifully shot. The city of Berlin is a character in that movie, and the architecture is so much a backdrop for the story, which comes across when you see it play out in front of you in a theater.

I’m currently looking for an agent to help me sell a novel. I also have two and possibly a third story collections in manuscript that I have been a slacker about trying to find a publisher for, so in an ideal world (as of course we know it isn’t, but one can hope), you will see at least one and maybe a couple of those manuscripts make its way into the world. I’m also recording an EP with five songs—I like to say I moonlight as a country singer—so I’ll be putting that on Bandcamp sooner or later.

Tom Andes’ writing has appeared in Best American Mystery Stories 2012, Pulp Modern, Witness, Tough: Crime Stories, Valparaiso Fiction Review, Shotgun Honey, and many other places. He won the 2019 Gold Medal for Best Novel-in-Progress from the Pirate’s Alley Faulkner Society. He has taught writing at institutions including San Francisco State University, Northwest Arkansas Community College, and the New Orleans Writers Workshop, which he co-founded. He lives in New Orleans, where he works as a freelance writer and editor and moonlights as a country singer.