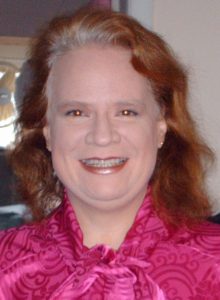 I always tell stories to my readers one-on-one. (If I think in terms of the whole world, I’ll freeze up!) I’m just an entertainer. I write horror and humorous fantasy stories that hopefully will make you laugh; maybe make you think. Even though my stories might have “messages “at the end, I don’t set out to make profound statements with my writing. “Should” sounds a bit strong for what I do, like exercising or eating right, but I would love for the world to read my work because I so much enjoy sharing the idea: “What if C followed A, rather than B?” Hopefully they will enjoy my style, and just as hopefully it inspires them to their own ideas of “And what if D should follow…?”

Getting offered a grade promotion after reading one of my poems to a school board representative when I was six? (I still remember that poem, and I’m too embarrassed to reprint it here!) I suppose it was actually the typical situation of the shy only child with her nose in a book all the time. I’d picture myself as the protagonist (and sometimes the antagonist…) and write my own story, at first only in my mind and then, as I got older, on paper. “What if…?” has always been the jumping-off point of my writing. I’m always reading and my stories take on different tones from whatever story or stories I read just before I write. “Compelled” is a good term for it: I will write stories even if I am the only one who will ever read them. (That may well be the case with some of what I write, but I always enjoy going back years and decades, re-reading what I wrote back then.)

I would say read anthologies. Choose your favorite genre, or the current “Best Of”. They’ll give you the widest range of styles of stories that successfully reached publication. (Though short stories and novels each have a different “tone” to their writing which I still can’t describe in words; you might also want to check out any novels written by your favorite short story authors to get exposure to that author’s different handling of each form.)

I would say “write what you like to read”. In the first place you’ve read a lot of that genre and know what’s already been done, how it was done and what you liked/didn’t like about it. A lot of people say you should (or worse, have to) “read everything” or “major in English/Creative Writing”, but I’ve gone that route and though I enjoyed it and still do, I don’t find having done it as essential to the writing I’m doing now. I’m not discouraging it, because reading the classics is enjoyable and will influence your life and your own writing as much as everything else you read. Just don’t let not having done it stop you from writing. Everyone has something important to share with the world, and we’re waiting to read it!

Learn grammar (or keep a good text nearby as you work) and especially build up your vocabulary, so that you know how to convey what you want to say in the most effective way possible.

And if you think of a great idea or turn of phrase: Please, please write it down immediately! Even if you have to wake yourself up out of a sound sleep to do it! I’ve lost so much good (in my own opinion, at the time, anyway!) material by not doing that and telling myself, “I’ll remember it later”!

Some books change our lives. Can you share which books have absolutely change the way you look at the world, the way you approach life? How did they affect this change in you?

The first book is self-explanatory: My autobiography could be titled “Eat, Pray, Worry”. But you just can’t write humor (or pretty much anything fictional) and self-censor. (That’s what editors are for!) If you worry about anyone possibly taking offense at something you write, you’ll be too afraid to write at all. Just don’t offend for its own sake. (There are stories like that out there.)

As a Christian I naturally worry about how a book that portrays Satan and demons as humorous (and sympathetic, in Samhain’s case) characters might be received by fellow Christians and the world at large. But after hard work and harder marketing research, I follow the maxim I try to live the rest of my life by, “Let go and let God”, trusting that it will eventually be published when and where it will have the most benefit, which is all I ever wanted for my writing. (Payment is nice, but I’ve done the majority of my work for contributor’s copies.) If it should never see print, readers have already told me that they’ve gotten some much needed laughter from the episodes that have been published, and nothing’s more satisfying to a humorist than making people laugh!

It’s impossible for me to choose a single movie, so I would have to say everything Sci-Fi or Fantasy! I’ve never forgotten seeing the first Star Wars movie in a theater: That famous opening scroll and the accompanying soundtrack booming louder than any noise ordinances would allow in any residential area! “Real life” movies can be enjoyed anywhere on any device, but as for science fiction and fantasy: Castles are never as impressive, dragons never as menacing, space ships and universes never as awe-inspiring as IMAX and Dolby make them on a screen the size of a wall!

Along with “serious” horror I’ve been writing a series of humorous episodes featuring “Samhain”, a nine-foot-tall assistant demon to Satan who, the harder he (seems to?) try, the more he fails. They began with “Another Damn Working Holiday” for the Halloween issue of Crossroads magazine in 1996, and have since appeared in The Midnight Gallery (1997), Black Petals Issues 5 through 8 (1998-1999), and Planet Relish (December 1999), a now defunct online humor magazine.

Presently I am working on compiling the entire series into a book with the working title The Devil’s Own Luck.

My writing career began in 1996 when the only draft of a dream I transcribed one night which I titled “The Cabinet Of Living Things” was accepted to the first magazine I submitted it to. (The Monthly … Bulletin, issue #67). It also earned me my first fan letter, which the editor was kind enough to forward to me, and which I had laminated! An expanded version of “Cabinet…” can also be found in Outer Darkness issue #21, published 21 years ago this month (May 2000)!  “Cabinet…” opened the Pandora’s Box of over 35 horror and fantasy stories and poems appearing in Black Petals, Penny Dreadful publications, Dark Planet, MindMares, The Midnight Gallery, Eyes, Outer Darkness, Dark Planet, Extremes Vol. 1, Microhorror and Crossroads among others. in 2017 I was proud to have my story “Double Jeopardy” accepted for publication in Pulp Modern 2, Issue 2. My most recent appearances since then are in Thuggish Itch – Devilish, Dig Two Graves Vol. 2, and the Gypsum Sound Tales publisher’s specialty anthologies Gypsum Sound Trails, Gypsum Ground Tales, Gypsum Sound Tails, Gypsum Sound Jails, and Gypsum Sound Veils. The Gypsum Sound Tales appearances are specially written humorous fantasy “Satan & Samhain” episodes which began a life of their own in Crossroads #16 Halloween issue.

I currently reside in small town Northern California (Complete with an actual picket fence! A dream come true for this native-born Chicagoan.) I share this fence with a cat (Bullseye, who fits between the slats), a husband (Ramiro, who doesn’t), and a Samhain (Samhain, who likes to think he fits in everywhere.)