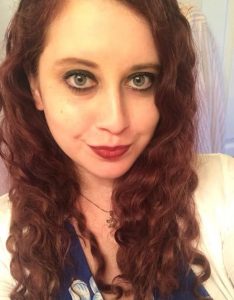 I’m a writer, actor, and cat mom from Southern Illinois, and I recently received my MFA in Fiction. Also, during quarantine, I took up cosplaying as a hobby. I’m currently the only person on TikTok to cosplay Jill Tuck from Saw, which feels like a cool accomplishment, and I’ve introduced my own characters to a new audience through the app, as well.

I’m working on too many things at once, but at least that way, there’s always something exciting to look forward to! I’m writing the third novel in my Shadows of the Mind series and the second in a space opera series (the sequel to my MFA thesis). I’ve recently finished a crime novella, and I’m outlining and brainstorming more pieces in that genre.

I want to help break down some barriers. In my MFA program, there was a stigma among many of the students about genre fiction, and I received a lot of negativity and condescension for writing sci-fi, fantasy, horror, and crime (not to mention the romance novels I write under a pen name). Personally, I think that the goal of writing should be to tell a good story that interests you as a writer, because if you’re telling a story you aren’t passionate about, it will be clear on the page, and that story won’t keep the interest of your readers. By exploring a variety of genres and writing work that crosses genre lines, I want to help break down the idea that any one type of writing is inherently superior to another.

The same applies to writers. I was one of two women in my fiction workshop when I started grad school, and we were often talked over and talked down to even though we were both actively publishing work (when most of our classmates weren’t). I want my persistence and success to show other writers that they can make it regardless of the negativity they’ve received if they keep going and tell stories that people want to read.

Who are some of your influences? How have they influenced your work?

I’ve had so many, both literary influences and cinematic ones. I learned a lot from the raw emotion and symbolism in some of the classics, especially Wuthering Heights, which is still one of my favorite books, and Poe’s short stories. I grew up on sci-fi, from reading Bradbury and Card to watching every piece of Star Wars, Star Trek, and Stargate media I could find. The same for fantasy—Harry Potter solidified my love for reading when I was little, and now I’ve seen every episode of Game of Thrones and everything in between. My favorite part of any story is the worldbuilding, and I try to consume as much media as I can, so that I can learn more about which worldbuilding methods are effective and how I can improve my own storytelling.

I’ve been working with Pinckney Benedict since I started my undergraduate creative writing program, and he eventually became my MFA thesis advisor. He taught me the basics of a scene in a way I’d sort of intuited but never really been able to put into words before then: your character can’t be in the same state at the end of the scene as they were at the beginning. You need modulation, and whether that’s physical or emotional, something has to change for your character. If they enter the scene feeling confident, they need to leave feeling defeated, etc. The character’s development over the course of each scene needs to be compelling enough to keep your reader wanting to start the next one.

Pinckney also taught me about the uninventable detail, that thing that’s so unique to your character that it makes the world feel real and lived-in through its specificity. I try to bring that into each of my stories and novels. In “These Violent Delights,” published in Pulp Modern Vol. 2, Issue 5, my character Isis keeps track of the days that have passed during her captivity by making notches on the underside of her table with the tines of a fork. That’s weird and specific to her—it’s not something the other characters would do. Even little details can help a story or a character stick in a reader’s mind.

It would have to be Queen in the mid-80s. Their music is on most of my writing-related playlists, and I wish I’d been around to see them in concert with Freddie, especially at something like Live Aid. I’ve been to a lot of amazing concerts, but even the big ones I’ve seen have been on a much smaller scale than that. I’m a huge fan of classic rock, and I wish I’d been born sooner so I could’ve seen more of the bands I love in their prime. (I’m a 90s kid.)

Veritas, the second novel in my Shadows of the Mind series—set in the same world as “These Violent Delights”—is coming out on October 5th! It’ll be released by Brown Chicken Books, an imprint of SFK Press. If you enjoy sci-fi, action, suspense, and a fair bit of murder, check it out!

Mandi Jourdan received an MFA in Fiction and a BA in English/Creative Writing from SIUC. She is the author of the Shadows of the Mind series from Brown Chicken Books, including bestseller Lacrimosa (2020) and Veritas (forthcoming fall 2021), among numerous other publications. She won the Missouri Review’s Miller Audio Prize for Prose in 2019 with her short fiction piece “Inheritance.” The Shadows of the Mind podcast based on her novel series is available on all major audio platforms. She also co-hosts the podcast “Fugitive Voices,” and she is the associate publisher at Southern Fried Karma and its imprints. When not writing and listening to eighties rock, she spends time with her cats. She can be found on Twitter (@MandiJourdan), Instagram (@mandi.jourdan), and TikTok (@madamjigsaw).