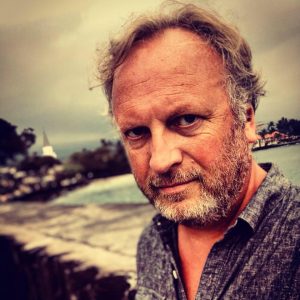 I’m just some guy. But, OK. I’m a writer and editor. I spent 25 years as a newspaper reporter and editor, then 10 years as a self-employed manuscript editor, and now I do that as a side hustle while I work for Amazon full-time as an internal book reviewer for the Kindle Vella serial storytelling project. I’m from Bainbridge Island, Washington, just a ferry ride due west of Seattle, and now live in nearby Kingston.

I’m working on a serialized thriller story under a pen name for the Vella project. Beyond that, I’m poking away on various book manuscripts. Maybe I’ll actually finish one to my satisfaction before I lose cerebral continence. Assuming that hasn’t happened already.

I used to want to be a traditionally published author. I wanted to be seen, be praised, be externally validated. But as I get older — 56 in June 2021 — I care less about that and more about writing for my own satisfaction. The stories I want to write have limited to no commercial appeal in today’s publishing market, and that’s OK. I could be angry about that, or I could live my life. I just want to prove to myself that I can write a good novel-length story that I’m proud of. It’s been a long journey because I have a bewildering mix of gifts and weaknesses and as a writer, and am still learning to balance that with an ever-improving sense of story craft. I can turn a good phrase but I lack a reliable internal storytelling compass. I steer off into the story weeds pretty often. Even though I’m good at spotting that same tendency in the work of others. It’s been decades of frustration. All the more so because working every day with other people’s words as a way to pay the bills often drains my daily battery for my own word production.

Who are some of your influences? How have they influenced your work?

Even from a young age, I’ve been most drawn to stories of Everymen and Everywomen who get into an unholy mess by bad choices or circumstance, and have to dig deep and discover an extra gear they didn’t know they had to grind their way out of it. I tend to like stories that dwell in a moral gray area, too, so antiheroes with some good qualities are a personal favorite.

Influences? They range from old-school noir masters like John D. MacDonald and Charles Williams, and my namesake Jim Thompson, to expansive thematic moralists like Stephen King and Tom Perrotta, to newer noir masters like Lynn Kostoff and Tod Goldberg and Laura McHugh, to sleek dark stylists like Lisa Lutz and Wallace Stroby. And I have a heart for the great and overlooked authors of our time; for instance, there are few books I’ve enjoyed more than Kelly Braffet’s Save Yourself, Leonard Chang’s The Lockpicker, Randy Kennedy’s Presidio, and Lutz’s The Passenger.

Probably my favorite noir author of all time is Peter Abrahams, and if there’s one novel I’d put forth as a portable MFA in the craft of dark suspense writing, it’s Abrahams’ 2007 novel End Of Story.

I have learned to take the same advice from writing-craft guru James Scott Bell that I’ve given to countless clients over the years: “Open with a disturbance to your protagonist’s universe. Act first. Explain later. You will never go wrong delaying exposition. Every passage and every page of your story should thrum with pleasurable uncertainty.”

What are you currently reading? How’s it going—recommend, or no?

I’m balancing new and old stuff, as I typically do. Right now, I’m toggling between John D. MacDonald’s 1977 bestseller Condominium (big recommend!) and the “it novel” of the spring/sumer of 2021, The Plot by Jean Hanff Korelitz (good but maybe a bit overpraised). Also William R. Soldan’s short story collection Houses Burning (yea), The Churchgoer by Patrick Coleman (a frank and fresh look at the male gaze through a male’s eyes), and the umpeetnth reread of Joe R. Lansdale’s Hap and Leonard series, beginning with Savage Season (big hell yes). And I’m finally reading my first Joyce Carol Oates, We Were The Mulvaneys (spooky good).

Live music has never been a seminar part of my coming-of-age experience, but I do love good music — I’m a deep-dive Seventiesologist — and I guess I would have liked to have seen Jimmy Buffett in his 1973 incarnation, when he was “just” a catchy country-rocker with a quasi-journalistic eye for human flotsam and jetsam, the kind of people I like to read about in novels. I really love the music he made before he went Full Metal Parrothead and became the patron saint of Mai Tai-slurping orthodontists.

A lot of quotes on Twitter from the books I read, a lot of signal-boosting for authors I admire, and a lot of sharp-elbowed opinions about crime fiction that sometimes get me into trouble.

Jim Thomsen is a manuscript editor, bookseller, copywriter and house-sitter based in his hometown of Bainbridge Island, Washington. He spent nearly 25 years as a newspaper reporter and editor. His short fiction has been accepted for publication in West Coast Crime Wave, Shotgun Honey and Switchblade, but his biggest claim to published fame might be turning up as a character in the C.J. Box thriller PARADISE VALLEY. For more about Jim, check out jimthomsencreative.com and follow his noir photography on Instagram.