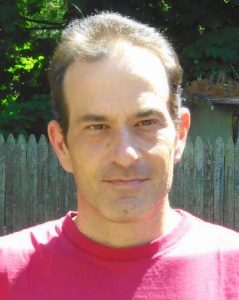 I’m not sure the world needs to read my work.  If I can help somebody pass some time and make them think–or better yet make them feel– I’m happy.  My goal is to tell a story that’s engaging and fun to read.

As a kid I’d write for my own amusement, or to show my parents or my sister.  In the first grade I won a prize in the Young Authors program for a story called “The Hungry Easter Bunny.”  Later, like many aspiring writers I guess, I would come across a story and afterward think, “I could do that.  I could do even better than that.”

I think every aspiring writer should read Hemingway.  A hallmark of telegraphic brevity,  Hemingway was also a linguistic artist who used cumulative structure to craft some of the most beautiful and engaging complex sentences in the English language.

Read all the Stephen King you possibly can, as no writer’s joy for storytelling comes through his or her work more clearly or abundantly.

I think the most important thing is to keep composition separate from editing.  When you’re constantly looking back to see what you’ve written, you can’t help but notice the mistakes—and there will always be mistakes.  Instead of shifting gears from storytelling to editing that instant, reassure yourself that you’ll handle all of that in the edit.  Or, better yet, don’t look back at all until you’re done with the first draft.

Some books change our lives. Can you share which books have absolutely change the way you look at the world, the way you approach life? How did they affect this change in you?

The first book that made a real impact on me was a children’s book titled “Uncle Louie’s Fantastic Sea Voyage.”  It was an adventure story with hints of horror, and from the moment I read it I was hooked on the spooky and the unexplainable.

Stephen King’s “The Shining” was the first adult novel I ever read, and it had a profound influence on the way I thought about and approached writing.  I can still remember being shocked and delighted by the opening sentence, “Jack Torrence thought: Officious little prick.”

“Biocentrism” by stem-cell pioneer Robert Lanza is a book I’d recommend to everyone.  It’s a beautifully simple reassessment by a biologist of some of the major questions plaguing the fields of cosmology, quantum physics, and philosophy.

2001, A Space Odyssey, or any film by Stanley Kubrick.  A photographer and chess-hustler, Kubrick constructed his films as mysteries to be puzzled out though careful interpretation.  Just below the surface narrative of nearly every one of his films are a number of sub-narratives, sometimes emphasizing, other times completely changing, the apparent themes of the movie.

And how can anyone fully appreciate the monolith scenes, or the stargate scene of  2001 A Space Odyssey on anything but the largest screen possible?

I have a few short stories I’m excited to start shopping around (mostly psychological horror,) and I’ve nearly completed  a new story that’s taken far longer than usual to write.  Sometimes they come easy; other times they come out sideways, limbs splayed and clawing on for dear life.  It’s a promising first draft, though, and I’m looking forward to that first round of feedback.

Robert Kane is a writer of horror and science-fiction.