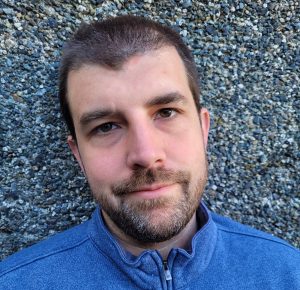 Who are you? Where are you from? What are you working on these days?I live on Vancouver Island, Canada, with my wife and daughter. But I’ve also spent a few years living in more remote areas of the country, which has influenced my writing quite a bit. In fact, these days I tend to write more rural noir and small-town crime than anything else.

Until recently, I’ve been writing fiction only sporadically. I worked as a journalist in busy daily newsrooms for about nine years, which didn’t leave much time for side projects. Now that I work for myself as a marketing consultant, I have more freedom.

I’m just focused on writing fiction that’s unique and honest (as un-unique as that statement sounds).

I try to bring something new to old themes or tropes in a lot of my work. But at the same time, I want my fiction to speak to some kind of emotional truth — regardless of how bizarre the story is.

For example: I set out to give the necromancer trope a modern update when writing “Just Another Necky,” which appeared in the winter issue of Pulp Modern. But the story also turned into a cautionary tale about blind ambition, something I became painfully familiar with during my newspaper career.

Find a good mentor and/or group of beta readers. I’ve been mentored by two authors through the American Horror Writers Association and their feedback helped me improve surprisingly fast.

Of course, it’s still important to ‘read, write, repeat’ no matter who’s critiquing your stuff. But mentorship can help you figure out what might be holding your writing back.

What are you currently reading? How’s it going—recommend, or no?

I just finished David Joy’s Where All Light Tends To Go. He did an amazing job of exploring complex relationships against a backdrop of violence. I definitely recommend this novel.

Probably Nirvana, just after releasing their debut album Bleach. Kurt Cobain died before I was old enough to see a live concert, but their music became the soundtrack for my misspent youth.

I have stories coming out in Shotgun Honey, EconoClash Review and a cli-fi anthology so far this year. But I’m considering taking a break from short fiction to focus on writing my first novel.

Dustin Walker is a former journalist, a current marketer and a constant writer of dark fiction. He lives on Vancouver Island, Canada, with his wife and daughter. His stories have recently appeared in (or are forthcoming from) Shotgun Honey, Pulp Modern, EconoClash Review and Yellow Mama.